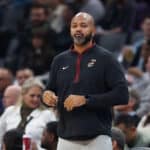 The Cleveland Cavaliers took a five-game losing streak into Friday's contest versus the Charlotte Hornets, and for a little while, it looked like the slide was going to continue. The Cavs had built a sizeable lead early on and maintained it late into the fourth quarter when Charlotte went on a furious rally in the final minute to force overtime. It took two … END_OF_DOCUMENT_TOKEN_TO_BE_REPLACED