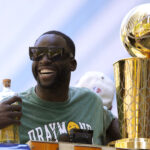 When LeBron James returned to the Cleveland Cavaliers in 2014, they already had some good, young players, and his presence made them instant championship contenders. They won the NBA championship in 2016, and many fans in Northeast Ohio are convinced that had it not been for Kyrie Irving's injury in the 2015 NBA Finals, the Cavs would've won the world title that … END_OF_DOCUMENT_TOKEN_TO_BE_REPLACED